BCBC In The News

Maclean's: The most important charts to watch in 2019

Canada and China led the world in global borrowing 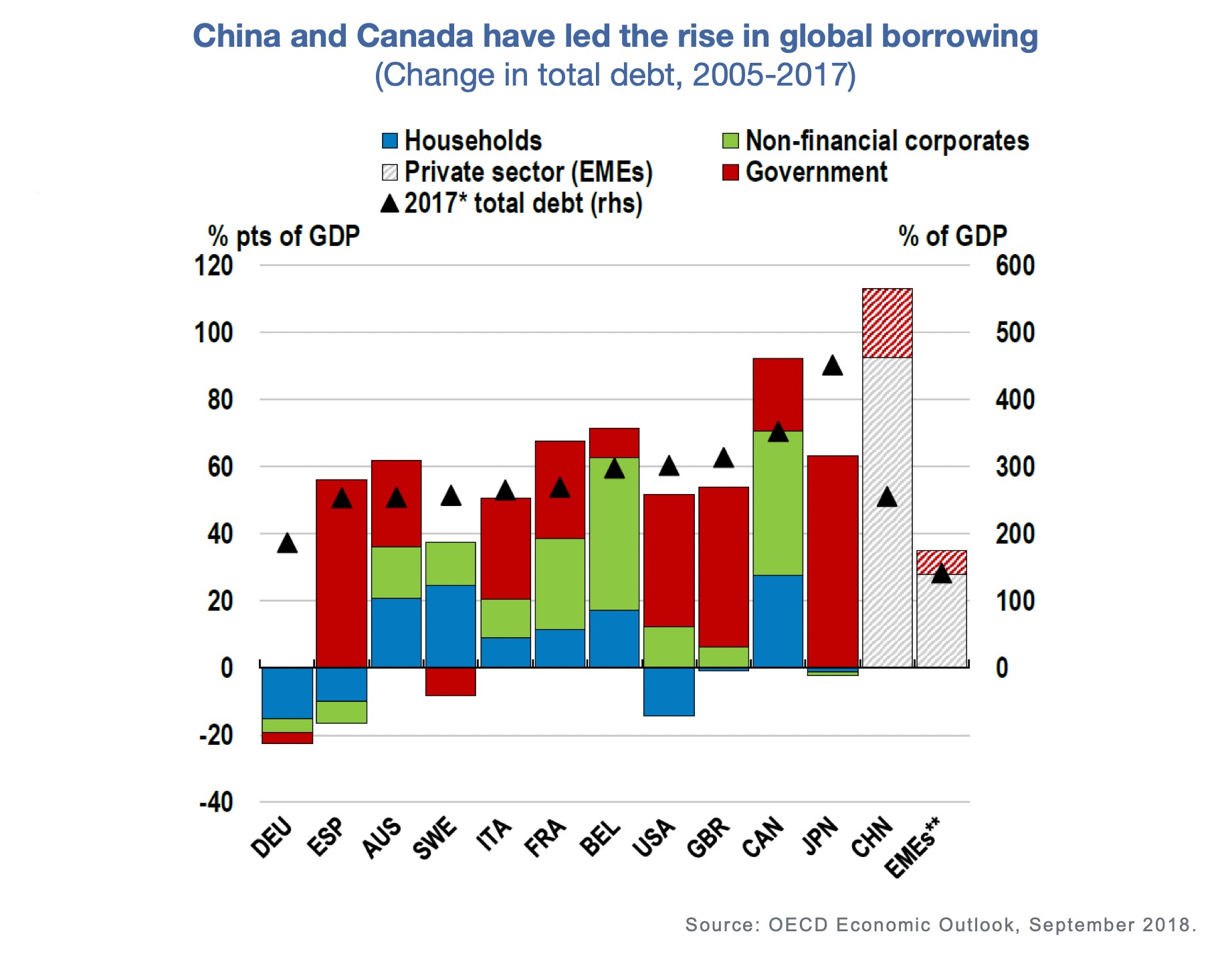 “At a time when Canada is struggling to hammer out a strategy for managing relations with China, it is good to know we have at least one thing in common with the Middle Kingdom: a seemingly relentless appetite for credit.

The chart, courtesy of my colleague David Williams, shows that China and Canada have outpaced all major economies in the build-up of debt.  Since 2005, debt in Canada has jumped by more than 90 percentage points of GDP; in China, the increase is even greater, 115 percentage points of GDP.  After a dozen years of frenzied borrowing, total debt now sits at roughly 360 per cent of GDP in Canada and 265 per cent of GDP in China.  Most of Canada’s debt accumulation has been driven by households and non-financial corporations.  In China, the broad private sector has also fuelled the debt bomb.  As interest rates and the cost of credit move higher, heavily indebted Canada and China will both be battling some powerful economic headwinds.”

B.C.’s productivity gap with the rest of Canada has narrowed as the country’s overall productivity has slowed considerably since the start of this century, according to the Business Council of British Columbia (BCBC).

Its November 16 report noted that growth in Canadian real gross domestic product (GDP) per person, a key measure of living standards, has dropped since the 1960s. Prior to 2000, Canadian incomes were doubling in roughly 30 years (one generation). But the BCBC report noted that, at recent growth rates, the same standard of living increase would now take four to five generations.

Business in Vancouver: Morneau to allow businesses to write off capital investments faster

Morneau's move means that on that front, there will be a level playing field.

“The Americans have always had more attractive CCAs [capital cost allowances] than we’ve had in Canada so they permitted faster write-offs,” Finlayson said. “That’s one of the reasons they were able to survive higher statutory tax rates.”

“Canada, and particularly B.C., are jurisdictions where it is very attractive to keep your net income below $500,000 a year,” he said. “That’s a strange signal to send entrepreneurs and companies.”B.C. has a small business tax rate of 2%, which applies to the first $500,000 in profit. Finlayson called this incentive an “odd” practice because it makes the level of taxation climb by six times once that threshold is reached.

Business in Vancouver: LNG Canada held up as model for successful investing in Canada

Competitiveness has, in fact, become a major concern for Canadian businesses and foreign investors. It was the topic of discussion by Horgan and LNG Canada CEO Andy Calitz at the BC Business Summit hosted by the Business Council of BC.

Billions of dollars worth of energy projects, including pipelines, have been killed or delayed in Canada in recent years by regulatory inertia and opposition from environmentalists and First Nations.

The result of cancelled and delayed oil pipelines is a deep discount on Canadian oil that is costing the Canadian economy billions.

Both Horgan and Calitz suggested that the $40 billion final investment decision by the LNG Canada partners addresses some of that cynicism.

Daily Hive: 42% of BC jobs threatened by automation over the next 20 years: report

A new report forecasts the automation of many jobs across various sectors in BC’s economy over the coming 10 to 20 years.

According to the Business Council of British Columbia, 42% of jobs in the province are in ‘high risk’ of being automated over the coming years. Another 37% are at ‘moderate risk’ of being replaced by potential automation.

Most B.C. workers shouldn’t expect advances in technology to advance their incomes in the coming years, according to research from the Business Council of B.C. (BCBC).

In a November 1 risk assessment examining the impacts of automation on the workforce, the council concluded 42% of B.C. workers are in occupations with a “high probability” of being automated in 10-20 years.

Compared with the rest of the country, B.C. has a larger share of jobs more susceptible to automation such as retail salespersons, food counter attendants, cashiers, transport truck drivers and general office support workers.

Ken Peacock, chief economist at the Business Council of B.C., told BIV on Oct. 29 that B.C.’s low jobless rate could put pressure on employers to boost wages amid an increasingly competitive job market.

Of all the issues facing businesses, getting rid of daylight time doesn't come up in boardroom discussions about how to improve Canada's economy, says the president of the Business Council of British Columbia.

Greg D'Avignon said Friday businesses spend little time considering the pros and cons of moving clocks backwards and forwards by one hour in the fall and spring.

"It's not even in the same constellation of issues that are of concern to businesses at this point," he said. "I talk to a great many business leaders that are international, national and local and the barrier caused by daylight savings time is the least of the concerns around how we can become more efficient as a country."

The B.C. Business Council identified three labour market trends: a shift from stable employment to more precarious work and self-employment, an increasing income gap between skilled and non-skilled workers and a declining quality of jobs with more being part-time.

Most of the “significant” changes are in the domestic economy where growth is expected to shift away from sectors that have “feasted on unusually cheap and readily accessible credit since the late-2000s” such as new residential construction, renovations and real estate transfer costs, the report stated.

It’s a consequence of the increasing interest rates issued by the Bank of Canada this year, said Ken Peacock, chief economist at BCBC and co-author of the quarterly report.

“A lot of people are highly leveraged because housing is so expensive, and they may have bought a home in the past two, or three, or four years, and now they’re facing interest rate increases and people are going to have to renew their mortgages at some point,” he said in an interview.

“So if you’re squeezed and highly leveraged, these interest rate increases that have already shown up in 18 months or so, they have an impact.”

The official go-ahead for the $40-billion LNG Canada project in northwestern B.C. is poised to give the provincial economy a sizeable boost in the coming year.

The final investment decision announced weeks ago has prompted economists at the Business Council of B.C. (BCBC) to raise their provincial growth forecast from 2.3% to 2.5% for 2019, according to its third-quarter outlook released on October 25.

Global economic growth, greater certainty resulting from the signing of the U.S.-Mexico-Canada Agreement and B.C.’s strong job market have also positioned the province “near the top of the provincial growth rankings.”

Business in Vancouver: Moving Cascadia corridor from vision to reality

“I would have said last year that people thought this was an interesting idea but didn’t really know what it was going to be,” said the CEO of the Business Council of BC (BCBC), whose organization has been among those spearheading recent initiatives to bolster economic and academic links between Vancouver and Seattle.

“Cascadia’s been a noun and now it’s a verb.”

From revolutionizing our region’s transportation connections, making sure it remains an attractive place to live, expanding and diversifying the STEM pipeline here and identifying groundbreaking treatments for cancer, the newly formed steering committee has a lot on their plate, but they don’t see all these changes being easy, or even happening soon. And, they say, the payoff will benefit more than just our region.

“We have a vision for the Cascadia Innovation Corridor that stretches beyond the next few years,” says D’Avignon. “We’re building a sustainable innovation zone that equips the corridor for long-term economic opportunity that will also help create solutions for some of the world’s toughest challenges."

Greg D’Avignon, president of the Business Council of B.C., said Tuesday that the decision by LNG Canada’s partners to move ahead with the project is a positive signal for the investment climate in the province, and provides a guideline for a low-carbon economy that can thrive with the right fiscal policies from government and strong support from Indigenous communities.

Mr. D’Avignon said B.C.'s large supply of renewable energy – mostly hydroelectricity – needs to be harnessed to help other energy-intensive sectors such as forestry and mining reduce their carbon footprint. “We’ve got the opportunity, as with LNG Canada, to be a global climate solution provider,” he said.

Capital investment is critical to business competitiveness; it is also fundamental to improving labour productivity, another area in which Canada, as the Business Council of British Columbia has noted, is lagging behind its global marketplace competitors.

Globe and Mail: B.C.’s climate targets will be impossible to reach if LNG Canada project goes ahead, critics say

Jock Finlayson, chief policy officer at the Business Council of British Columbia, said his group’s members support the province’s fledgling LNG sector, and the NDP government needs to tread carefully in supporting LNG Canada while addressing climate goals. “We are keen on seeing LNG move ahead, but we’re also very sensitive to the costs of doing business for all the other industries here,” he said in an interview. “The province will have to decide how to balance competing objectives.”

Read the full Q and A here.

But Greg D’Avignon, CEO of the Business Council of BC, said the courts’ involvement in the process has been a flashpoint for frustration for businesses and investors.

“It’s unfair to ask businesses to enter into a process and to invest capital and time and their reputation, knowing full well that today that process is unclear. You don’t know how much it’s going to cost, how long it’s going to take or whether or not when you follow the rules you’ll actually get a decision,” D’Avignon said.

“We’re seeing, in real time, capital decide not to place itself in Canada and British Columbia, and go elsewhere because there’s more clarity and more certainty [in other jurisdictions].”

Globe and Mail, Margaret Wente: The Trans Mountain ruling was a fiasco

As Greg D’Avignon, president of the Business Council of British Columbia said the other day in a tweet, “We cannot govern a country, meaningfully reconcile with First Nations or build the economy through the courts. ”